Beautiful article written by Carla Pagani for the magazine BARCHE (June 2018): a brilliant and dynamic synthesis that perfectly tells the story of Valerio Rivellini and reflects in a faithful way its approach to design as well as its vision of design.

Certain designer objects make an impression on us as soon as we see them. We are struck and captivated by them, without even knowing why. What makes the difference is an added value that is invisible to the eye, yet makes that object truly unique. This is always the case upon first seeing a boat designed by Valerio Rivellini, who became world famous for his Evo 43 with its futuristic and minimalist lines. This Neapolitan designer is always smiling and full of energy. His studio, established in 2009, specialises in yacht design, engineering, refitting and composite materials. We meet him on a beautiful spring day. We happen to pass by the Circolo Canottieri di Napoli, where his story began at the age of just 6. When there with his father he saw an Optimist dinghy in the sea: it was love at first sight. He trained hard and soon began competing. Then he started taking part in laser regattas. He performed consistently well. He went on to become an instructor, before becoming a skipper at the age of 19. In the meantime he studied naval engineering. Immediately after getting his degree he started working for some major yards.

«Life sometimes presents you with difficult decisions. However, it all came very naturally to me», he tells us as he regales us with one anecdote after another. His profile is an unusual one on the Italian scene. Indeed, there are very few creative engineers who are also designers.

«Knowing the impact of certain aesthetic choices from the outset enables you to design things in a completely different way. Being an engineer makes it much quicker to find a better technical solution, able to implement your idea in the best possible way».

This is the secret behind achieving practically perfect boats. Everything is predicted and calculated with pinpoint accuracy from the start. «I look after everything, down to the very smallest detail. What is more, being visually daring also pushes you to be innovative from a technological and constructive point of view», he adds smiling. «A handle can become a tap. A table can become a pool. Backrests can be turned into sunshades. An aesthetic solution is also a technical and functional solution».

Working in other sectors expands one’s horizons and opens up an endless world of possibilities. In fact, Rivellini also works in industrial and car design. The cement mixer produced for Delta is a little gem. Not to mention the ultra-light W Bike bicycle in laminate wood and carbon, with its futuristic design. Every project is a challenge.

«It makes no sense for me to say ‘it can’t be done’». The best ideas come at night. The following morning he arrives at the studio and gets to work on them with his team of young designers, architects and engineers.

His boats are both extremely modern and classical at the same time. When looking at them, one has the impression of looking at a large-scale Lego creation that can be endlessly transformed: a wonderland where everything is possible. «I try to bring ideas of modular and multifunctional design to small yachts too. Evo 43 can change in a thousand ways, just like a mega yacht. You have to be able to use your boat in the way you want, with the greatest possible freedom, at the touch of a button». Indeed, a mobile and an app are all you need. «Anyone who steps aboard a boat I have designed has to be able to say ‘it’s easy’. They have to feel at home».

Even a sailing boat can be comfortable, simple and homely, as demonstrated by the Rivale 78, a 24-metre concept yacht with a minimalist, retro design. «We wanted to use a beautiful large wheel rudder. It’s not usually very practical, it gets in the way, but we revolutionised it: you can walk under it». Functionality is key, albeit without forgetting tradition. «When we design we should never forget where we come from». Rivellini has created a masterful blend of ancient and modern on the Rivale 78: the deckhouse is built like 19th-century skylights, but in carbon fibre. And then there is the direct contact with the sea.

This is fundamental for Rivellini: «Getting into the water has to be simple».

A great example is the long pilot bridge in the stern of the large project he is working on at the moment: Vita 78.

«The transom is in the water while the bow is the manoeuvring zone», he explains. «It’s easy to get into the sea without having to use inflatables». Another revolution from Rivellini. 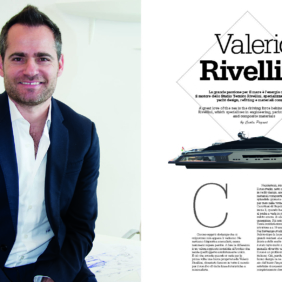 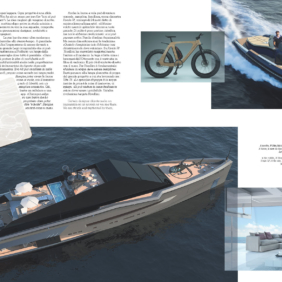 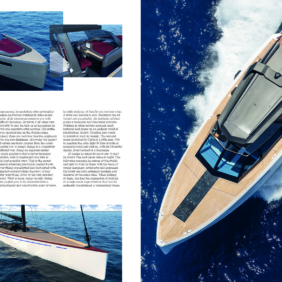 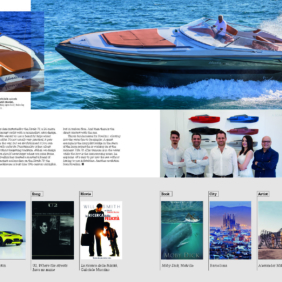